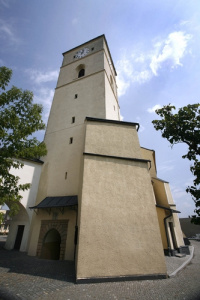 At first sight the main attraction of Klimkovice will catch your eye thanks to atypical shape of the tower end. But that's not the only unique feature of this building...

Two large fires in 1848 and 1854 destroyed all written records about the foundation of Klimkovice, historical sources are very vague, but in the old church inventory from 1806, we can find that the oldest bell in the tower had an inscription of year 1251. The second one said 1261 and that's why we assume that the Klimkovice settlement had wooden church with tower as early as the 13th century.

In 1383, Mr. Beneš I. from Kravaře, who was a favorite of Wenceslas IV., managed to persuade him to grant Klimkovice the city status. This is related to the city's coat of arms - a silver lion (standing on green hill) on a red field.

The year 1547 engraved into the stone lintel of small window in small sacristy was found while removing old plastering. It's probably the year of foundation brick church, which was founded in Klimkovice during the reign of Johanka of Bítov.

In 1572, the Klimkovice estate was sold to lower tier member of nobility Ondřej Bzenec at Poruba. He was member of the House of famous Czech knights, who in the early 16th century distinguished themselves in the battle against the Turks. After returning home, he rebuilt the chateau and the church in Renaissance style (1578 - 1579).  He dedicated the church to St. Catherine, who was the patron of his wife. The church was extended by the western part with a tower. The weight of the massive tower created pressure and caused displacing of the soil towards today's park and the tower started to lean. Therefore huge supporting column, which stopped the leaning, had been built. Now it’s diverted 64 cm from its axis. After the devastating fire in 1854, the original Renaissance tower end was not renewed but only finished with a low roof, which has remained there to this day.

The choir loft was connected with the first floor of the chateau through elevated passageway used by lords to attend the mass. Originally, the passage was covered only by wooden roof.

Ondřej Bzenec had the Bzenec family tomb built under the presbytery. The entrance, now covered by tiles, is located in front of the sacrificial table. Tombstones of Bzenec family members are located on the right.

The House of Vlček of Dubé bought the Klimkovice estate in 1612. At first they were Protestant, but after the Battle of White Mountain and the following recatholicization, Jindřich Vilém Vlček was raised (as) Catholic by the Jesuits in Wroclaw.

Between 1730–1738, Jindřich Vilém built the 25 meters tall beautiful dome in Byzantine style. It was built near the parish church on the north side of the chapel. The dome is supported by eight built-in pillars, topped with capitals of Corinthial resemblance. The altar with the God's tomb is decorated with the statue of St. John of Nepomuk, on his right is the statue of St. Wenceslas and on his left, there is the statue of the Jude the Apostle.

Jindřich Vilém Vlček worked his way to the rank of field marshal of Imperial Army, and because he worked in german environment he germanized his name. Since then, his name Vlček was to be written Wilczek.

Across the altar, his live-sized bust is carved to the west wall of the chapel. It's looking down on the tomb with access hidden under the benches in the chapel.

The church and the chapel create an interesting architectural complex. The main attraction of the church is the altar decorated with pillars made of artificial marble. There are four baroque sculptures standing on the altar. One of the wooden sculptures represents the Mary Magdalene with a cross in her hand, stepping on the snake's head as the winner over the evil spirit.  Another one depicts St. Rosalia with roses around her head, advocate at the time of plague. The third is St. Barbara, in a blue dress, with a chalice and sacramental bread; she is the patron of the miners. The last one is St. Apolonia with pincers in her hand; she is the patron of the dentists. A beautiful painting in a gold frame represents St. Catherine, whom the baby Jesus gives ring as to his bride.

Until 1776, burial ground was in close proximity of the church, later the cemetery was cancelled.

In 1939, there was a liquidation of the Town Hall located in the middle of the square and the relocation of the missionary cross and the Virgin Mary and St. Sebastian statues into the area between the old sacristy and chapel. During the digging of foundations for the placement of the cross and statues, the workers found the tombs. When disposing of these tombs, a pewter coffin was lifted and after it was unsealed a squire dressed in the hunter suit was found. When moving the body to another coffin, it disintegrated and turned into dust. Later, when the sewerage was being built near the church, workers found a lot of bones just below the surface. It is interesting that bones were found and under the supporting pillars in the eastern part of the church.

One of the other attractions of St. Catherine's Church is the organ. There is the original one from 1900, and another three manual organ was added in 1993.

Another of the dominant features of St. Catherine's Church is its fifteen crystal chandeliers, with large crystal Teresian chandelier (originally with stands for candles) as the centerpiece. Later on, it was electrified twice, followed by complete renovation of the chandelier in 2001.