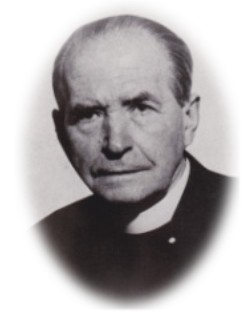 He was born in the family of a wheelwright’s master František Vašica and his wife Marianna (née Glabazňová). Young Josef belonged to five children of his father’s second marriage. He had four full sisters but also children from his parents’ previous marriages were brought up in the family. Although his father earned a living by craftsmanship, in his free time he used to play the violin, clarinet, as well as the double bass. He devoted a considerable part of his free time to music-making.

During this activity, apart from others, he became acquainted with Vincenc Prasek, a director of the Secondary Grammar School in Opava, a significant Silesian revivalist. It was him who helped young Josef at the beginning of his studies. When Josef Vašica completed his secondary education at the Czech Secondary Grammar School Matiční in Opava, his family including children moved to Klimkovice in 1902. The fact that his uncle, Msgre Eustach Glabazňa, was a parish priest and dean in Klimkovice at that time played a part in the decision making. Most probably thanks to his influence, Vašica also decided to study theology at the Faculty of Theology of the University in Olomouc. After finishing his studies, he was ordained a priest on 31st December 1906, and soon after that he accepted work as a prefect at the Archbishop’s Secondary Grammar School in Kroměříž. In the years 1907 to 1911 he studied Slavonic philology at the University in Vienna. In 1911, he was awarded the degree of Doctor of Philosophy with qualification of a university reader. Then he started to teach Czech language at the Archbishop’s Secondary Grammar School in Kroměříž. Meanwhile, the First World War passed and the Republic of Czechoslovakia was formed. In 1919 he was conferred the title of university lecturer for the subject of Old Church Slavonic language and literature at the already existing Saints Cyril and Methodius Faculty of Theology in Olomouc. From 30th July 1928 he was a full professor of this subject there. He worked at the faculty until 1937 when he changed over to the Theological Faculty of the Charles University in Prague. He was elected a member of the Czech Academy of Sciences and Arts. However, his further educational activity was interrupted partly by closing of Czech universities during the German occupation and then after a short post-war intermezzo again by dissolving the Theological Faculty in 1950. Therefore, he dedicated himself fully to scientific work in the field of Old Church Slavonic language, Old Church Slavonic liturgy and literature.

Professor Vašica’s scientific activity was very extensive. He devoted a lot of both his time and effort to the study of Czech Baroque literature. He published in numerous professional journals and cultivated scientific contacts with a number of personalities of that time. His translation work was wide-ranging, too. He translated from Old Church Slavonic, Latin, Russian and French. At the end of his life, he summarized the results of his work in a unique book “Literární památky epochy velkomoravské 863-885” (Literary Memories of the Great Moravian Era 863-885), (Prague 1966). Until his death in the year 1968, he took an active part in the editorial board of the Dictionary of Old Church Slavonic Language, for which he prepared and newly interpreted particularly legal memories. For his scientific achievements he was appointed a papal chamberlain by the Church.

When he died, Prague took farewell of him in the Church of St. Saviour on 17th April 1968. On the following day he was buried according to his wish in the old cemetery in Klimkovice alongside his uncle, priest E. Glabazňa. Later on, in connection with shutting down this old cemetery, by permission of the Archbishop of Olomouc Msgre Jan Graubner it was decided on exhuming his remains from the grave in Klimkovice and transporting them to Velehrad, where after a memorial ceremony they were deposited in the Jesuit tomb of the local cemetery. The exhumation of mortal remains, memorial and religious ceremonies took place at the parish church of St. Catherine in Klimkovice on 16th April 1993.